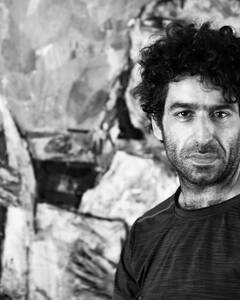 Satire and irony play into the work of Alaa Abou Shaheen, taking the form of figures and animals, or even common Arab tropes, drawing on caricature figures from popular culture and recognisable allegorical references, such as the donkey as a sign of stubbornness. His caricaturist pieces portray social concerns or criticism and his sarcasm is apparent when he is quoted as saying “if wisdom and knowledge were quantitative, then the enormity of the donkey’s head would have become a symbol of philosophy.”

Alaa Abou Shaheen was born in 1983, and graduated from the Faculty of Fine Arts, Damascus University in 2006. He later worked as a Fine Arts Assistant professor in Aleppo during the years of 2010 and 2011. Alaa has held several solo and collective exhibitions between 2005 and 2018 in his homeland, Beirut, Amman, Bahrain, London, and Paris. His artwork was aquired by YINCHUAN Muesuem of contemporart art in China. The artists is currently living and practicing sculpting in Paris.