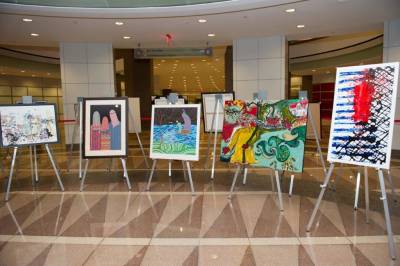 Syra Arts has cooperated with the League of Arab States in Washington DC to bring to the American public two exhibitions showcasing artworks of   Arab artists.

The first exhibition was held at the Ronald Reagan Center in December of 2014 and 21 artists of different nationalities and backgrounds showcased their works.

The Second Exhibition titled “Women’s Stories”, was held at the United States Institute of Peace in 2016. In celebration of the empowerment of female leaders, SYRA Arts put together a unique collection of art works that acknowledges the importance of women in the social and economic development throughout the Middle East. The exhibition included artworks by female artists living and working in the Arab World or in the United States as well as works by their male counterparts illustrating the role and relevance of women in the social and cultural structure of the region.