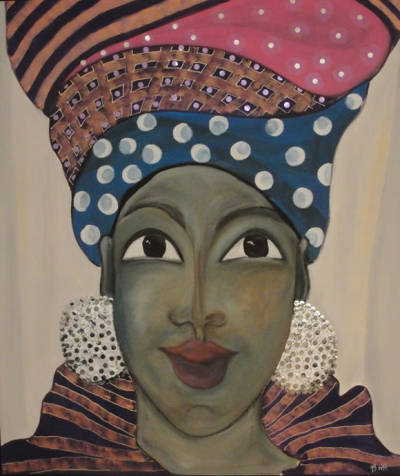 Britt started the women’s portraits with a series of pastels that were a refreshing momentary departure from her abstract work. It was like playing with decoration and embellishment, and was joyful and refreshing. Small works on paper grew into larger and larger canvases, as the women became nearly an obsession. Each woman she painted had a power over both her and people who came to see them. These portraits represent the steadfast Egyptian woman. She is coquette and loves to dress up. She hides behind these masks that she uses to cover up who she really is. You never really truly get to know her. What you do get to know is how she wants to see herself. Ironically, even the most unattractive Egyptian woman has incredible self-esteem and confidence, which western women lack. There is intrigue and there is the moment of surprise and daring with regards to personal embellishment and presentation. Everything is about seduction. This is what makes these women so powerful. The women in these paintings have no limits. They stand strong and convey harmony and love to the onlooker, and tell you that only you are responsible for your life. They celebrate the strength of women. Not just Egyptian women, but also in a universal sense

Britt Boutros-Ghali is known for her vibrant, colorful and energetic paintings, She is as enigmatic as she is revered and is considered one of the important Norwegian artists of this century. Steeped in the early influences of abstract expressionism, she studied painting and sculpture under Ellen Christensen and Ferdinand Lunde in Oslo in the late 1950’s. Her earliest work debuted in Paris at Galerie de L’ Universite in 1965 at the same time that Niki de Saint Phalle joined her onto the Paris art scene. Britt participated in the Abstract Expressionist movement in Europe in the 1960’s and 1970’s, and is still driven by these early influences.

Britt has exhibited internationally throughout her career. Her work is widely collected in both public and private collections worldwide. In 1996 Britt was awarded the Saint Olav’s Order, the highest Norwegian honor given to an artist, by King Haakon of Norway, for promoting Norway through her art abroad. Edvard Munch is the only other artist to have received this honor during his lifetime.

Britt was born in 1937 in Svolvaer, located in the northern most part of Norway. Her early years were overcome by the harsh weather and daunting pressure of the Second World War. This powerful backdrop provided a fertile landscape for her bursting, colorful and emotional work.

In great contrast to her beginnings, Britt has spent the last 35 years in Egypt. Her studio is a barge on the Nile, which serves as a place of abundance—not only for local artists and eccentrics to meet, but also for people who travel from afar to see and collect her work. The many years spent in Egypt’s rich, colorful and exotic culture and environment has greatly influenced her work.