Reflections From The Old Town Of Jerusalem FROM OVER THE WALL 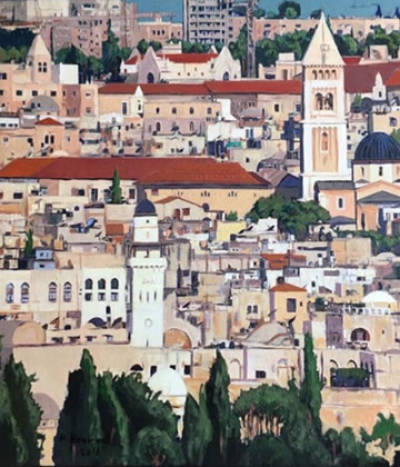 Hani Hourani captures the urban essence of Jerusalem in his densely worked images. These are paintings on canvas in acrylic and mixed media. Long range perspectives provide the viewer with a bird’s eye view of the city as historical repository of people’s hopes and dreams, but also as a dynamic setting for the cultural clash of present day political forces. The frangibility of the urban fabric reflects the pressure as well as the beauty of this highly charged city.

Artists Statement: "Twenty years ago; in 1996, I went to visit Jerusalem for the first time after it was occupied in 1967. My earlier trip to Jerusalem was thirty years before, back in summer 1966; only one year before the war. I was then hosted by a friend of mine who studied with me at the University of Jordan. Sami Suleiman was then living with his mother in the town of Beireh. Sami and I, along with a third friend, used to spend a couple of weeks in what was then called the West Bank, commuting between Beireh, Ramallah, Jerusalem, and other Palestinian cities.

Although I went to Jerusalem repeatedly after my 1996 trip, this first visit after the Israeli occupation was the most enjoyable. My three daughters were with me and were fortified with weighty cameras that belong to the pre-digital photography era. Most importantly, our tour of the city was from above the old city wall, starting with the Damascus Gate of Jerusalem and passing through other gates of the old town, whilst crossing long, narrow pathways surrounding the historic area. It was like an unending arch or wall that encloses the old neighborhood of Jerusalem; running from above the stone houses, vaulted historical buildings, and public schools with small playgrounds. You would discover all of a sudden tiny openings that reveal narrow alleys and tiny shops, filled with buyers and shoppers along with tourists.

From over the Wall you would stare at the details of the daily lives of Jerusalemites, hundreds of satellite dishes installed on rooftops to communicate with the outside world, to hear the news and to watch movies. On top of the roofs you would notice clothes lines stretched and hanging dozens of white and colored clothes that barely dry up only to be replaced by other pieces of clothes belonging to extended families living together in the old houses. You would observe dozens and hundreds of cables and clothes lines emerging from within the domes of mosques and the towers of churches, and hanging in between the arcs of windows and gates. In the midst of this scene, one would suddenly find a number of olive trees along with cypress trees, lying in patterns one behind the other, and looking just like a protecting shield to the area.

The work that is exhibited here features flashes of my trip to the Old Town of Jerusalem, where I took dozens of photographs, colored and black & white. This work does not seek to glorify the holy city; as Jerusalem certainly does not need my effort to confirm its sacredness. My paintings aim at merely portraying the Old Town of Jerusalem as it is; away from any sanctification. It is indeed a city that was built by existence and shaped by historical and political developments. Yet, it has remained the town of its original inhabitants; Palestinians who are striving in their everyday life to live and to communicate with the world, whilst renovating the buildings that were left behind by their grandparents. This is how I believe the town of Jerusalem was, from over the wall... twenty years ago."

Hourani is a Jordanian painter and photographer. Born in Zarqa’a in 1945, Hourani began practicing art at a very early age. His artistic career was disrupted in 1967, when he decided to pursue a more political and cultural line. In 1993, Hourani emphasized his specialty by resuming his works and holding an exhibition for his water color paintings, where he focused on capturing natural landscape views of Al-Waleh Valley, south of Amman.Hourani’s outstanding contribution is mostly recognizable in photography. Since 1996, he has held thirteen solo exhibitions in a number of capitals around the world, such as Amman, Aleppo, Cairo, Doha, Gothenburg; Sweden, Washington DC, and the 11th International Cairo Biennale in Cairo.

Hani started showcasing his photographic works in 1996 and has since held around 16 solo exhibitions in the Gutenberg Museum (Sweden), USA, Aleppo, Cairo (Egypt) and Doha (Qatar) in addition to Amman, Petra and AlSalt city. His works were also exhibited in Al Manamah Museum (Bahrain), Al Sharjah Museum (UAE) and collected by the National Fine Art Museum in Amman- Jordan.

SYRA Arts has been promoting contemporary Middle Eastern and Iranian art and artists in the United States since 2011. SYRA provides a glimpse into the depth and diversity of contemporary art in the region by showcasing the works of artists from different generations in a wide range of artistic mediums.

Click here for a PDF version of this press release.