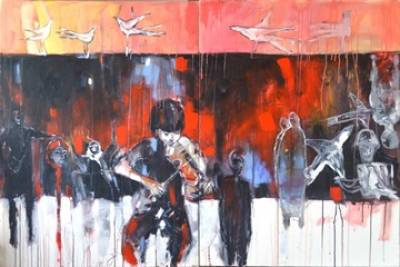 SYRA Arts is pleased to open its Fall season with a unique show for Kurdish Syrian artist Lukman Ahmad.

Through colorful expressionism and imagination, Lukman Ahmad presents a spectrum of human experience, and offers his audience a glimpse into his Kurdish culture. Through his brush, music, dance, laughter, suffering, compassion, and passion, he invites the viewer to experience the story of his people - a people forgotten and without a nation - yet a people that has preserved a rich and full culture. Both his deep loyalty and belonging to his heritage, and the ongoing Syrian conflict have had a huge effect on his art.

This conflict has destroyed a beautiful land and ruined almost all hope for a future worthy of its innocent children. In his painting “Melody of Hope”, he could not find colors other than the black and red to express this tragedy. His pain arises from two sources: one, as a Kurd looking for freedom, and the other as a Syrian hoping for peace.

Lukman is deeply in touch with his heritage and his deep sense of belonging to the Kurdish land is emphatically portrayed in his painting style, and with the intertwined surrounding cultures around which he lived. This exhibit aims to express his experiences with authenticity and imagination, and to allow color and movement to tell the stories he witnessed, whether ones of pain or of happiness, of contemplation or of passion. His work transports the viewer through color, rhythm, and symbolism, into the world he lived and the emotions he felt.

The exhibit reflects the value he places on art’s role in our lives as a path to understanding oneself and one's environment, as a method to show the Kurdish and Syrian experience, and as a way to alleviate conflict and suffering. As an artist, he firmly believes that music and art remain higher than the whistling of bullets.

Lukman Ahmad was born in Kurdistan, in what is today Northeast Syria. He began his artistic path in 1986, and subsequently educated himself in the artistic method, art history, and in philosophy. His Kurdish birth and upbringing provided him with a drive to artistically express his profound personal connection to the Kurdish land and its people. Today, his aim is to reflect on the Kurdish as well as the human experience. His experiences continue to arouse compassion for humanity, and to drive his commitment to art’s role in elevating human life. His art is his method of helping effect understanding, and in removing conflict.

Lukman came to the United States in 2010 as a refugee. Since then, he has coped with adapting to a new culture and way of living, learning a new language, and earning a living, while also striving to find his place as an artist in America.

He has had over 45 exhibits in various countries, including Syria, Turkey, Iraqi Kurdistan, Switzerland, Lebanon and the United States. Galleries and exhibits have ranged from solo exhibits in Washington, D.C. with the Foundary Gallery (2012), the Voice of America Building (2015), and the Jerusalem Fund Gallery (2013); and group exhibits in West Branch Gallery and Sculpture Park in Stowe, Vermont (2016), Artomatic in Maryland (2012, 2015, and 2016), the Auckland Art Museum with the University of North Carolina (2011), and the Workhouse Art Center in Virginia (2014).

SYRA Arts: Based in Washington DC and Cairo, SYRA Arts is a contemporary art gallery dedicated to presenting Middle Eastern and Iranian artists and designers. Founded by art collectors, Sylvia Van Vliet Ragheb and Randa Fahmy Aboul-Nasr, the gallery presents a dynamic program of exhibitions with an emphasis on fostering long-term relationships with both emerging and established artists. Reaching out to art lovers, collectors as well as institutions around the world, SYRA has expanded its programming by organizing exhibitions in satellite locations around the United States. We believe that by introducing artists’ work in different cultural spheres around the globe we can facilitate a process of cultural exchange, thereby raising awareness and understanding between the varied heritages.

Click here for a PDF version of this press release.