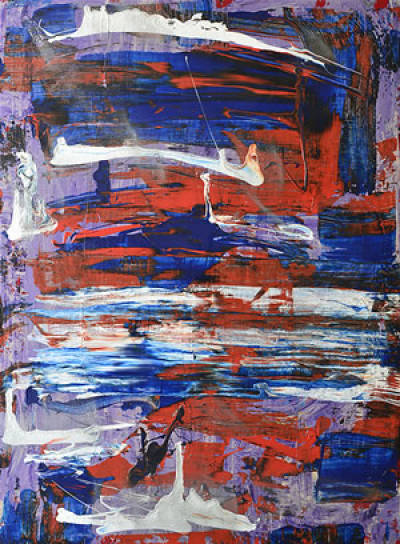 Salameh Nematt was barely 19 when he held his first solo exhibition in 1981, encouraged by the head of the Royal Society for Fine Arts, HRH Princess Wijdan Al-Hashemi, who officially inaugurated his art show.

But despite the success of his initial foray into the art world, he turned to journalism, driven by his desire to help push for political reform and modernization in the kingdom.

Salameh Nematt has worked for over 25 years as a journalist, economic and political writer, researcher and analyst of developments in the broaderMiddle East, Europe and the United States. He contributes to numerous, Arabic, English and international publications and broadcast media.

With the breakout of the Arab Spring, Nematt returned to his original passion ofpainting. His current artworks are a testimony to his desire to resume a journey started over three decades ago, although with a political flavor that is unmistakably the product of the continuing regional socio-political upheaval.

“Cradle of Annihilation” is inspired by social and political upheavals throughout the Middle East, My artwork seeks to put the viewer before raw, emotional and subtle expressions of conflicting, incomprehensible and oftenshocking images emerging from the birthplace of civilization. The promise of freedom brought about by the “Arab Spring,” has now been brutally extinguished by oppressive regimes clinging to power, and/or religious fanatics seeking to turn the clock back to medieval times. My art is about the crushed spirit of freedom, both social and political, now buried under the weight of the status quo, after a brief fleeting revival. In this series, I tried to portray theagony of the human spirit as it struggles for salvation from the current nightmare.

Artist, architect and curator Ammar Khammash best put it in describing my artwork: “In each work, there is an element of canceling, veiling, layering, burying, and excavating, all done at once, toconstruct, or unearth. These works are immersed in the inflamed socio-political makeup of the region that the artist, for more than three decades, knew only too well and lived to a painful extreme.”