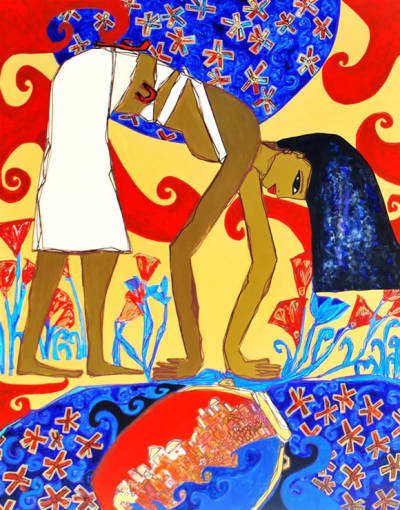 Syra Arts is pleased to present, a solo exhibition of new works by artist Mona El-Bayoumi. Please join us on September 19th from 6 to 8 pm for the exhibition opening and to meet the artist.

This exhibition is the artist’s take on the current uprising in Egypt. Throughout the years various icons of Egypt have been and are still coming in and out of her body of work. Egypt is commonly known as "the mother of the world" and because of its ancient past, many throughout the world feel a link to her. She has been the opening scene, with many waiting to see the finale, which could take another several acts and will only be a minute in our Ancient History. During the past months, like many who have followed the happenings in Egypt, Mona has been taken in many directions as both a spectator and an artist. She was drawn to more varying colors in this show, colors which reflect hope, anger, and optimism, all changing more frequently than any other show, reflecting the different directions her homeland has gone in over the past few years. Modern artists in Egypt have also used such icons and have had their colors displayed on the streets expressing their unique take on the happenings in Egypt. "Dig Out” represents reserved optimism for Egypt in the hope that it returns to its more glorious, productive and dignified days.

Mona El-Bayoumi is one of the most well recognized Egyptian-American artists in the United States. Her work has been featured in galleries and institutions both in the United States as well as internationally, notably in Cairo, Paris and Johannesburg. Born in Alexandria, Egypt in the early sixties, she has, since the age of five grown up in the politically active university community of East Lansing, Michigan. The designs and themes discovered during her travels throughout the Arab World at a young age made a strong imprint on Mona's artistic vocabulary and the vibrant colors expressed in American artistic culture of the 60's and 70's colored her bright palette. This dual Egyptian-American identity and international exposure can be seen reflected in Mona El-Bayoumi's artistic style throughout her career. Mona's love for art led her to obtain a formal Bachelor of Fine Arts degree with an emphasis in Drawing and Painting from Michigan State University and she thereafter pursued post-graduate studies in Art Education. She later obtained a Masters Certificate in Museum Studies at Georgetown University in Washington, D.C.

Syra Arts has been promoting contemporary Egyptian and Middle Eastern art and artists in the United States sine 2011. The gallery, which represents some of Egypt's leading contemporary painters, sculptors, and jewelry designers, strives to give a glimpse of the depth and diversity of contemporary art from Egypt and the Middle East, showcasing work by artists of different generations in a range of artistic mediums.

The exhibition shall run till 10th October 2013.